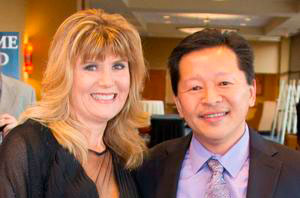 This couple makes an awesome pair of franchise owners!

Meet Hon and Su. The married couple that each owns their separate franchise businesses.

While most couples buy a house or a dog, this couple decided to buy a pair of businesses together.

As the lead digital strategist for All County, I got to interview the All County CEO Sandy Ferrera and she told me the story of how her sister and brother-in-law became franchisees.

Even though her sister came into the business kicking and screaming, she ended up being one of the highest yielding franchise locations to date.

And Hon was actually part of the franchise recruitment team! After helping sell franchises he saw the benefit of owning an All County franchise location and decided to invest in one for himself. He took the leap, made the investment, and the rest is history.

Now Hon and Su are two of All County’s highest producing franchises.

To hear the rest of the story watch the video and check out its transcript below.

And if you want to know more about the All County Franchise Opportunity then I encourage you to download the All County Brochure. It is a good place to start.

So my sister and brother-in-law are franchisees. They initially were not franchisees. My sister never wanted to do this business, she remembered what I did in the early days. She was in television, she saw me grow the business. She said never in a million years would she ever entertain property management. But Hon was working besides Scott and I in helping to recruit and launch the franchise system. And after we had signed four I looked at Scott and I said, "This is not fair to Hon," because he wanted a territory and we would award him one. We didn't want a fellow family member to be one of our first franchisees, but after four we said, "It's just not fair to Hon." But the caveat was that my sister would have to work in the franchise while Hon helped us continue to grow and recruit franchisees.

So she agreed, extremely reluctantly because she didn't want to do the business, and she said she would do it for six month. Well, six month came and went, she ended up really starting to enjoy the business, she quit her television job. And when it was time for Hon to go and join her in the business she didn't want him there. She felt like she had created this amazing business and she didn't need Hon to come in three years later and tell her what she should or shouldn't be doing. That was a unique moment for us. And fortunately, Hon has his own location in Clearwater and many years later they both have the ability to run their businesses separately as well as jointly. They found that happy niche.

« What does a franchise owner do each month?Is Buying a Property Management Franchise the Right Move? The Pros and Cons of Franchising »

"The team at All County is not only knowledgeable, but they are always accessible, responsive and they truly partner with us to ensure our success!"

READY TO TAKE THE FIRST STEP?

Disclaimer: This information is not intended as an offer to sell, or the solicitation of an offer to buy, a franchise. It is for information purposes only, If you are a resident of or want to locate a franchise in a state that regulates the offer and sale of franchises, we will not offer you a franchise unless and until we have complied with applicable pre-sale registration and disclosure requirements in your state.